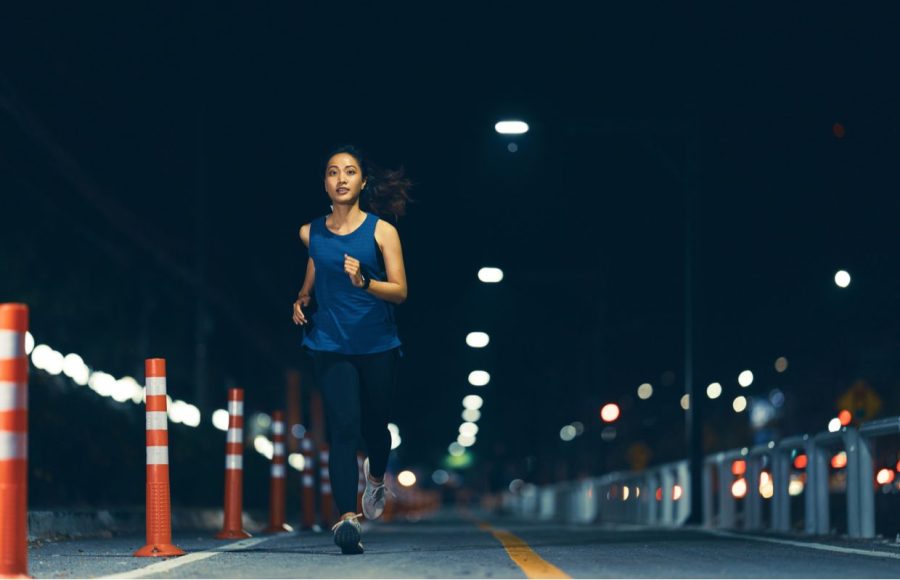 Spring is almost here – hooray! – but while it’s still dark early in the evenings, running coach Ben Parker shares how best to stay safe when running in the dark…

Running has a wide variety of health benefits and is a great starting point if you want to get healthier in 2022. From lowering risk of cardiovascular disease to increasing the strength of weight-bearing bones, and also improving mental health by releasing endorphins, there’s almost no aspect of your life that running won’t improve!

However, making time for a run can be tricky if you work. So, if there’s little time left during daylight hours, these tips can help you stay safe while running at dusk.

1. Map out your running route in advance

Though it sounds obvious, planning your route ahead of time or scoping the area during the day is one of the most proactive ways to stay safe if you plan on running in the dark. It will also give you an idea which roads are busier and which paths might not be as illuminated, rather than finding out for the first time while running it!

Plan to go through your neighbourhood, or ones nearby, and pedestrianised areas, or to go down well-lit streets with cars and people around, being sure to avoid dark roads and parks. Once you’re happy with your route, make it into a circuit that you can go around regularly.

2. Tell a friend where you’re going before running in the dark

Whether it’s a family member, friend or partner, tell someone you trust prior to your run where you’re going and how long you plan on being gone. There are various apps available to share your location with someone else, which can give both you and your trusted person peace of mind.

Plus, they could be able to come and collect you if the weather takes an unexpected turn for the worse or if you manage to pick up an injury. 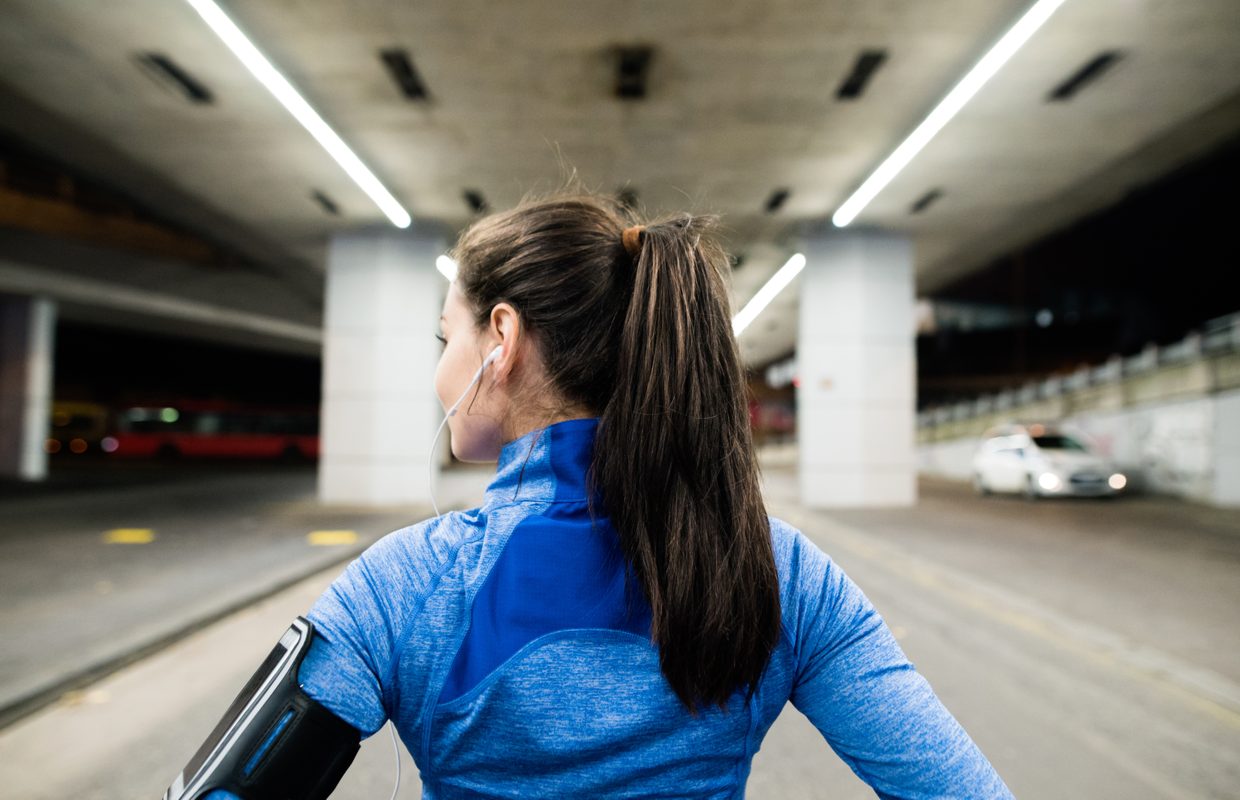 3. Keep your music volume at a sensible level

Staying vigilant is perhaps the most important aspect of going out alone in the dark, especially if you’re running in an unfamiliar area. It’s not advisable to listen to music or a podcast, so you can stay completely focused on the noises around you.

Having headphones on might also signal to a potential attacker that you can’t hear, whereas not wearing them would be a deterrent.

4. Make yourself visible to stay safe when running in the dark

Make yourself visible to others, particularly oncoming traffic and cyclists, by wearing a high-visibility jacket, a luminescent piece of clothing or a head torch (or a combo of them all).

While you should focus on protecting yourself, there is also a responsibility to protect others. As such, make it as clear as possible where you are and which direction you’re running in. 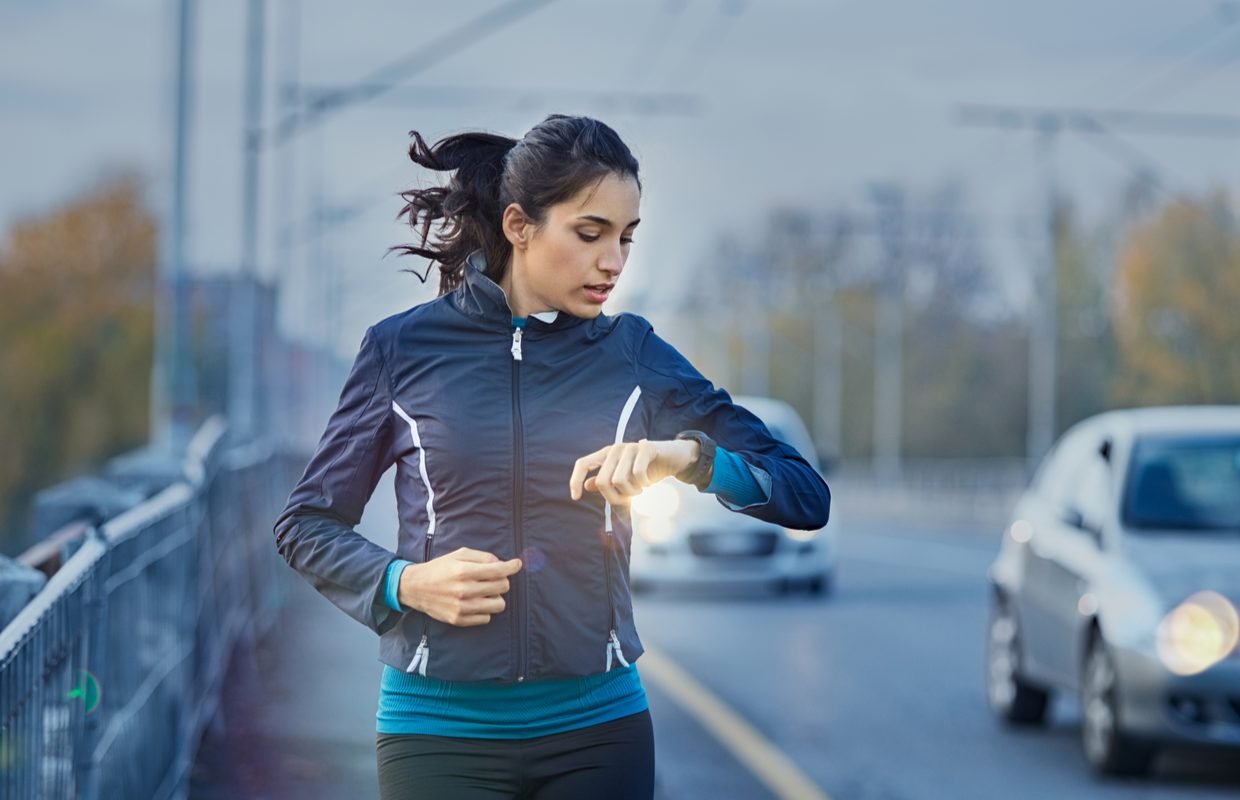 5. Take a personal alarm with you on evening runs

A small, personal alarm would be a good thing to take, and either hold it in your hand while you run or have it in an easily accessible pocket, should you need it.

6. Be sure to run towards traffic

Running towards oncoming traffic – at a safe distance, of course – gives both you and any cyclists or drivers more time to identify a potential accident before it happens or to take avoiding action if needed.

It sounds crazy, and it might sound a little scary at first, but it really does work! It’s better than being on the same side as the traffic flow as you can’t see what’s approaching from behind. 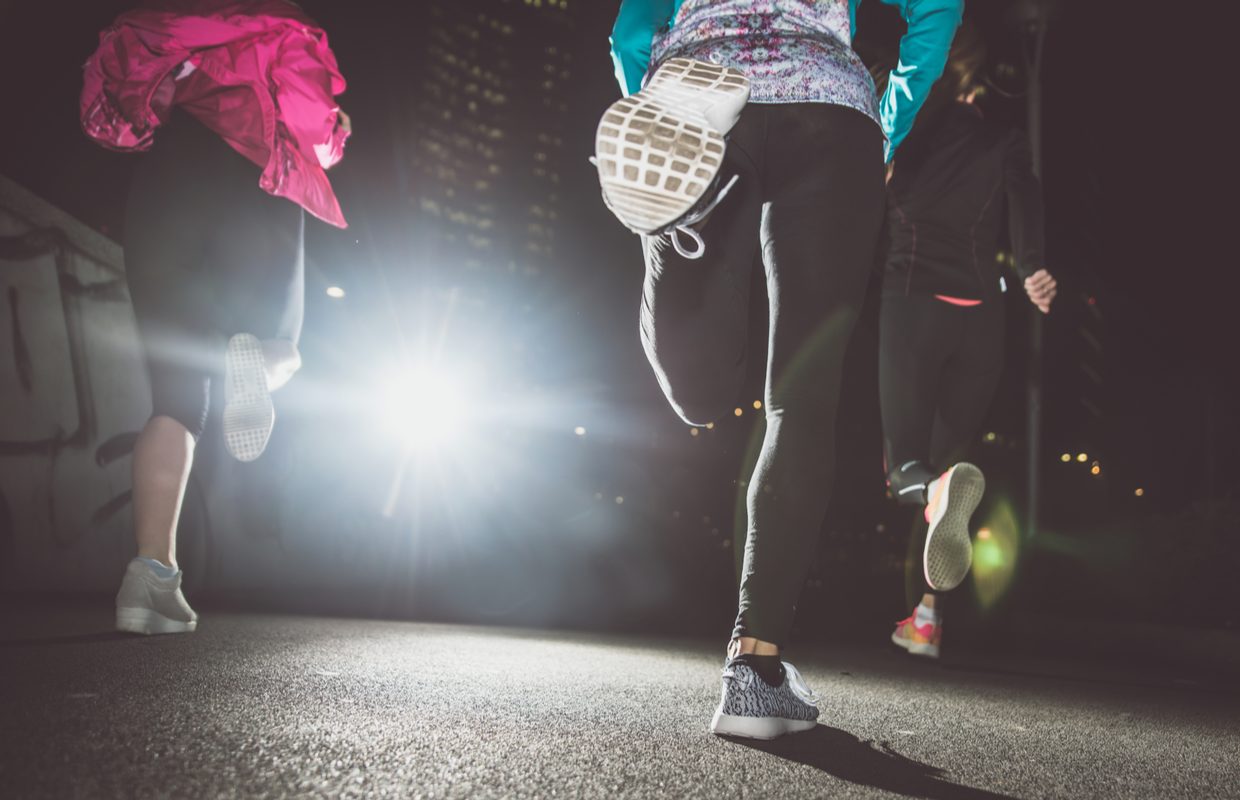 7. Take your phone with you when running in the dark

Getting away from all-consuming phone screens is often a big incentive for many runners, but it is still worth keeping your phone on you when running in the dark.

You can call a friend or family member if you sense something is amiss, you can double check your location or get directions if you make a wrong turn, and you can also turn on your torch if you need to increase your visibility.

8. Pay attention and look out for obstacles or hazards

It can be easy to get into the zone when running, especially when you’re running a route you know well, but all it takes is one new pothole or an object on the path and you end up with a sprained ankle.

Keep your eyes on the path in front of you and be sure to slow down if your visibility is reduced and you can’t see the ground or what’s in front of you. It’s better to be safe than sorry. 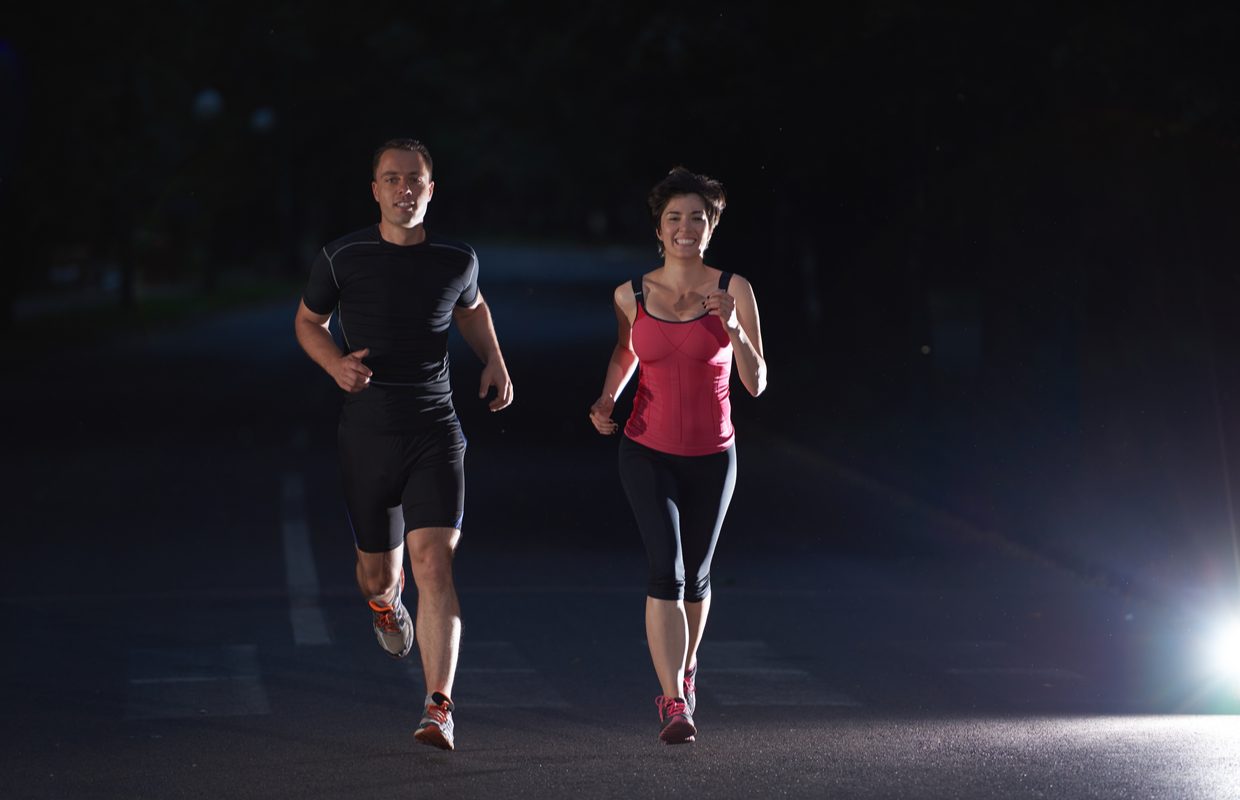 9. Run with friends when it’s dark

Of course, probably one of the ultimate safety tips is to buddy up with a friend. Or you could seek out an organised running club local to your area or go to a running event.

With events being held all around the country, there are plenty of opportunities to meet people with the same goals as you and become part of a new community. For one, RunBuddy is planning to hold two events each month in London 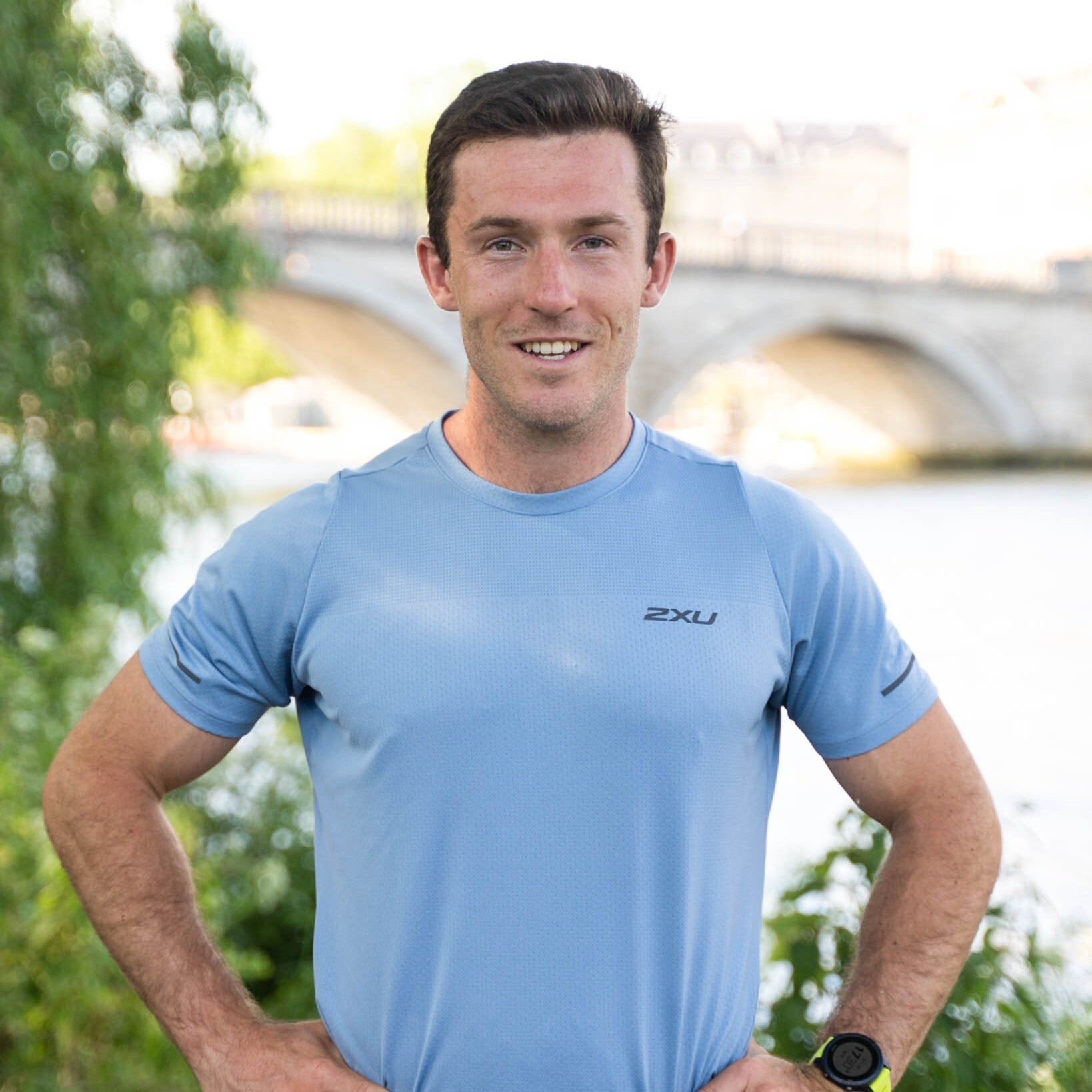 Ben Parker is co-founder and lead trainer for RunBuddy, an app that offers personalised coaching for runners of all experience levels, whether you’re starting out, already run regularly, or are aiming for a 5k, 10k or marathon.

For an extra 15 per cent off coaching plans during February and March 2022, use code TS15 at the checkout – visit therunbuddy.co.uk.