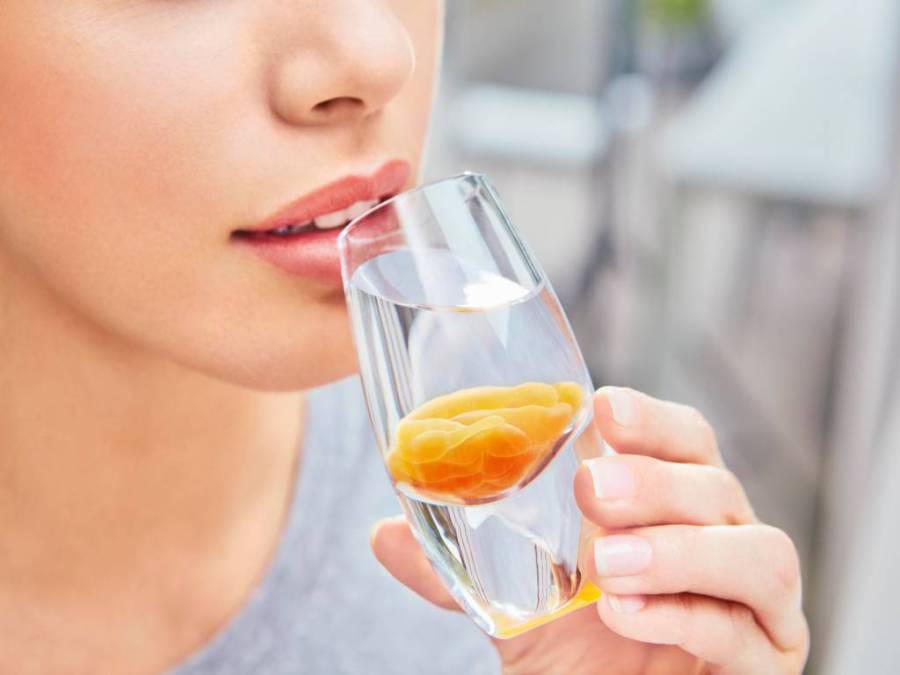 Top Sante editor Katy Sunnasse trialled a new form of Vitamin C supplement for three month…and got some of the best collagen, anti-ageing skincare and elastin-boosting results on record!

With so many drinks, tablets and powders promising eternal youth, the hype around products claiming to promote younger skin grows louder each year. Internal beauty products, such as collagen drinks, hair skin and nails supplements and all manner of antioxidant powders you can add to smoothies, are fast becoming a must-have addition to women’s beauty regimes across the UK.

However, while plenty of those drinks and tablets undoubtedly offer results, some of them can be pretty pricey, often setting you back more than £100 for a month’s supply.

So is there an alternative? Well, by going deeper into the science behind what makes up healthy collagen in the first place, you’ll discover Vitamin C. Yes, regular, common or garden Vitamin C – the stuff we get from oranges and tomatoes. Turns out, it’s one of the essential building blocks of collagen, which keeps skin looking great, as well as being fundamental to your overall wellbeing.

‘Vitamin C is basically fuel for your body – it’s needed by so many processes from head to toe,’ says Dr Thomas E Levy, world-renowned expert in vitamin C (www.peakenergy.com).

‘Not only does it help in making collagen, but it also helps your body to detox, most of which happens through your skin as you sweat. It’s not the only antioxidant to help, but it’s certainly one of the most important,’ he adds.

Interested to discover its effects for myself, I underwent a three-month trial of high-strength vitamin C using a liposomal supplement called Altrient C (www.abundanceandhealth.co.uk). Each sachet contains 1,000mg, or one gram, of the vitamin, encapsulated in a jelly-like substance.

People are often advised to take a maintenance dose of 1,000mg a day but I took 3,000mg – or three sachets (well, when I remembered. I’m not the best at sticking to routines, so some days it was twice, or once, or very occasionally not at all – I probably need a memory- or focus-boosting supplement too!)

What is Liposomal Vitamin C?

Most regular Vitamin C tablets, capsules or powdered forms tend to be composed of ascorbic acid, which is the most common form of Vitamin C. High doses of more than 1,000mg a day can, for some sensitive people, have side effects of loose stools, as it can irritate the stomach lining, but that is the only side effect your might get.

‘There’s actually no upper safe limit on Vitamin C – no one has ever suffered serious side effects from it even when using really high doses. You just have to find a dose that works for you, which means taking it to the limit of bowel tolerance, i.e. to the point where it starts to give you gas and slightly loose stools,’ says Dr Levy.

Fortunately I didn’t experience any side effects whatsoever with Altrient C, as it’s different from the powders so doesn’t cause stomach irritation. Instead, the vitamin is suspended in a liposomal solution – meaning it’s held in a fatty, jelly-like substance. 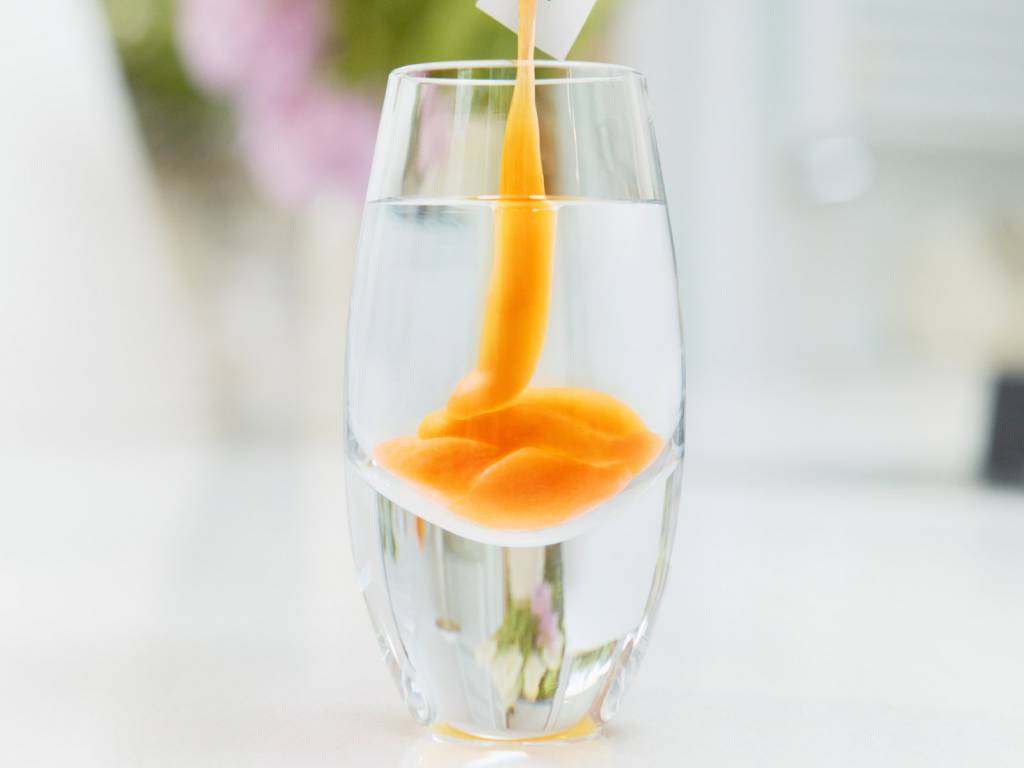 Altrient C is added to water but doesn’t dissolve

‘This delivery method allows the vitamin to actually get directly into your cells, through the cell membrane, where as ascorbic acid is better at detoxifying your gut,’ says Dr Levy. This is perhaps why liposomal vitamin C is being lauded for its skin-smoothing benefits, as it actually gets to where it’s needed.

But while Altrient has become a go-to for celebrities such as Gwyneth Paltrow, who is said to use it on flights to ward off skin dryness as well as any bugs hanging around in the stale cabin air, I personally don’t much care for celebrity endorsements – I always prefer to investigate things for myself rather than take a celeb’s word for it (not that I wouldn’t trust Gwyneth – she clearly knows a thing or two about health!).

What effects did Vitamin C have on my skin?

Before I started my trial, I had some incredibly detailed tests done, including a fully comprehensive blood test by acupuncturist and herbal medicine practitioner Jonathan Orchard to measure levels of vitamins and minerals as well hormones, cholesterol and all manner of health markers (seriously, if you want to get to the bottom of any health issue, THIS is the test you need – it’s the best).

I also visited Santi Spa in Kensington, where they have the UK’s only Cortex machine that measures levels of hydration, elasticity, collagen, TEWL (that’s transepidermal water loss – the amount of moisture lost through the skin) and erythema (redness) in minute detail.

Considering my skin has always been incredibly dry – I’d go as far as to say desert-like most of the time – and now prone to lots of fine lines, I was definitely up for seeing whether Altrient C would make any noticeable differences.

After three months, I had to be honest and say I couldn’t see any massively visible changes. I wasn’t convinced the elasticity had improved, however, the re-test for both blood and skin showed some pretty incredible results. 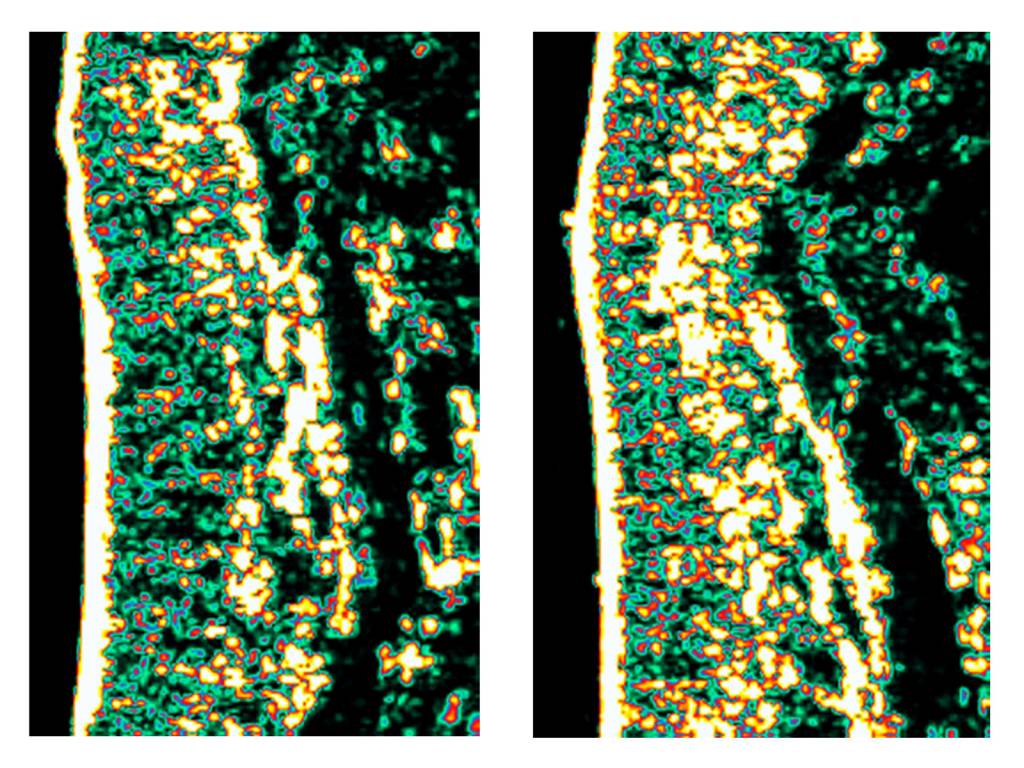 My skin elasticity shot up by 89 per cent (Tariq, who did the tests at Santi Spa, said this was the biggest increase he’d ever seen); collagen had gone up by 39 per cent – again, I’m told this is a huge improvement; TEWL had decreased by 16 per cent – a good thing as you don’t want to be losing water; hydration level had increased by 17 per cent and erythema (redness) declined by 16 per cent too.

Perhaps because I’d been gradually getting used to the changes I hadn’t really noticed them, or that they were taking place deeper down. I will say my eczema improved over the course – though I also credit a probiotic for this as since starting that last year, my eczema seems to be way better.

What actually impressed me the most were the internal improvements. Taking high-dose vitamin C has numerous health benefits, most of which are arguably far more important than skin thickness…. 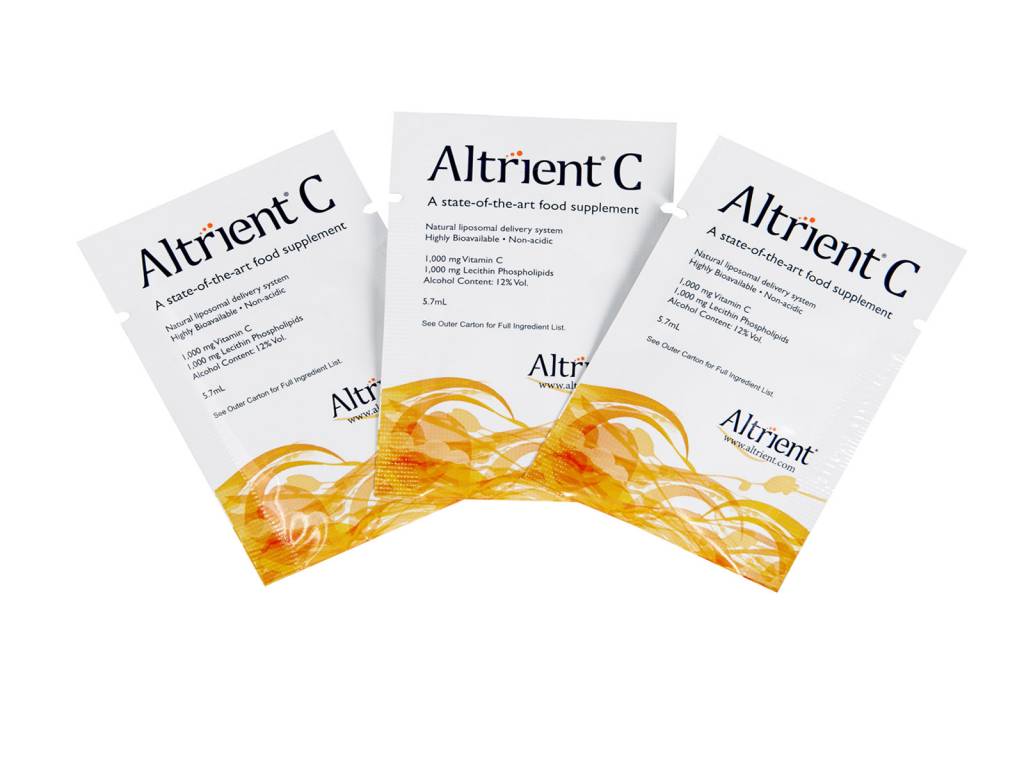 Each sachet is small and can be packed into your handbag

For one, vitamin C gets depleted when you’re stressed, as the adrenals need it to function. The more stressed you are, the more vitamin C (and B vitamins) you’ll use up – your adrenals virtually drink the stuff, according to Dr Levy.

Considering I’d been through a heck of a lot of chronic stress in my 20s – mostly worrying incessantly about whether or not I was doing things ‘right’, which is such a thief of happiness and joy – it was no surprise when in 2014 I did a blood test and was told I had stage 2 adrenal fatigue (there are three levels, apparently).

Your adrenals are what pump out adrenaline and cortisol to get stress under control, and my body had been on overdrive, on and off, for about 13 years. Having high blood sugar also puts your body under more stress and causes the release of insulin and cortisol. Ironically, when you’re stressed you tend to want to binge on sugary foods – at least I did – which though they provide immediate comfort only serve to worsen the effects of stress over time.

Cleaning up my diet and reducing sugar

Since 2015 I’ve made a concerted effort to massively reduce sugar intake for numerous reasons: to place less stress on my body, to keep blood sugar low, help my teeth (I have so many fillings that I blame on my previous long-running high GI diet) and also my skin. I know for a fact that whenever I eat lots of sugar in one go my eczema will flare up. Most conventional doctors deny the link between food and skin conditions, but I’ve observed time and again that the two are connected.

So where does Altrient C come in to all this? Well, on the repeat blood test, my thyroid and stress hormones were improved, as were my sex hormones (bar one, which is still too high). I didn’t do anything else different – and even ate some ‘bad’ foods during the trial (I had Christmas to contend with!) so can only put the internal improvements down to the vitamin C.

Also, a couple of times during the trial I felt a sore throat and cold coming on. I was advised to up my dose to 5-6 sachets a day – you really can’t OD on this stuff. And it totally worked – the sore throat diminished and didn’t develop into a full-blown cold.

There are also studies to show that high-dose vitamin C (higher than the amount I took) can stave off or reverse cancer, which you can learn more about in Dr Levy’s  eye-opening book The Primal Panacea (available at www.peakenergy.com). I devoured the book on holiday and recommend you do the same if you’d like to learn more about this incredible vitamin. It’s already the most commonly bought supplement in the UK, but nutritionists and functional medicine experts say the recommended amounts are woefully inadequate and need to be at least 1,000 mg a day minimum. 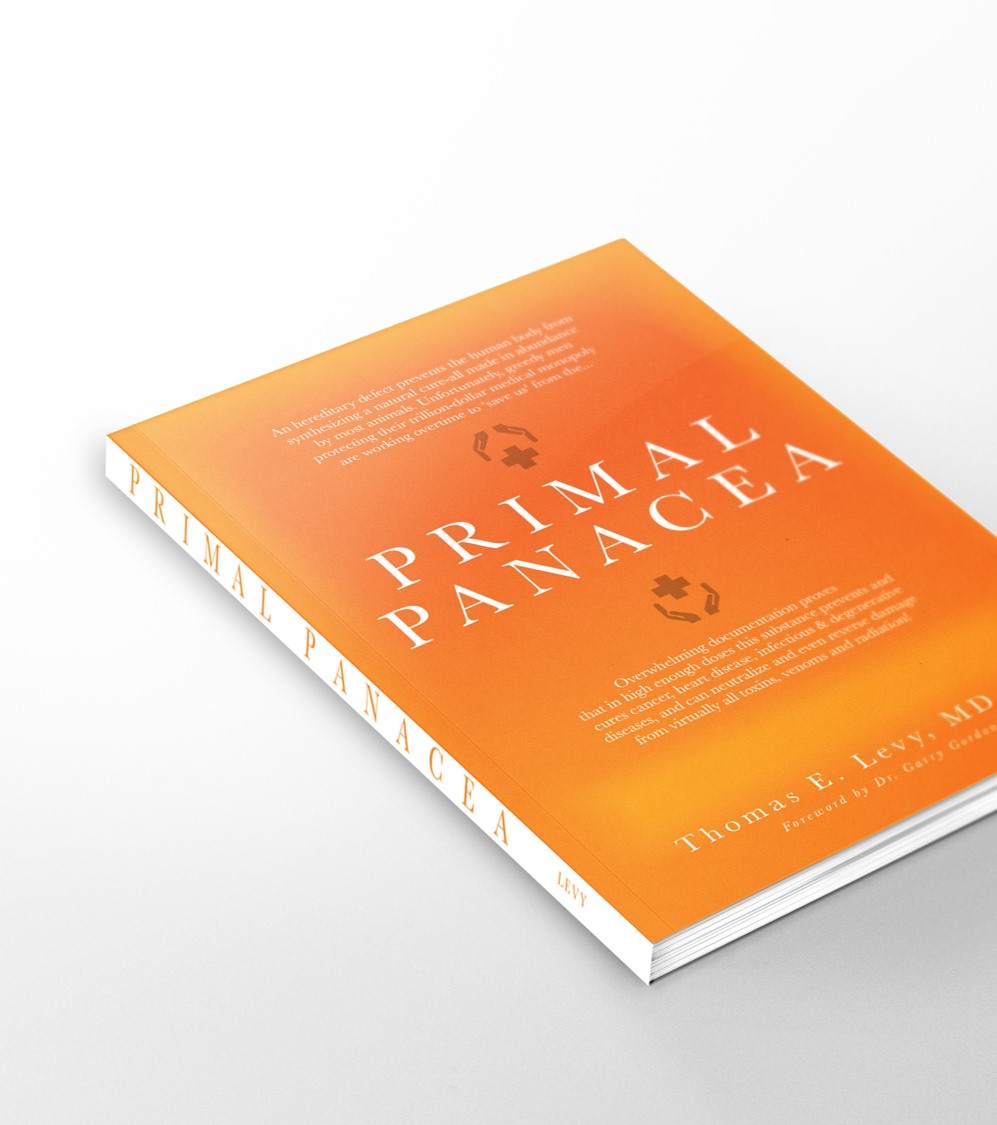 The secret to great health and younger skin?

Would I continue to take Altrient C? Absolutely. In fact after the trial I ordered a year’s worth (www.abundanceandhealth.co.uk). Yes it’s pricey, but you get a discount for bulk ordering – it’s normally around £35 for a month but reduces to £28 if you buy 12, which is what I did.

And if you’re doing it for anti-ageing and reducing wrinkles, just under £340 a year is less than a third of the price of most collagen drinks, plus you get lots of the same benefits. Don’t get me wrong, collagen drinks can work wonders too but they’re an investment, cost-wise.

We all need a full spectrum of vitamins and minerals to be healthy. But if you were to just make one health change or choice this year, I’d really recommend adding Altrient C or another liposomal form of vitamin C to your regimen. I’m not being paid to say this; I genuinely think there are so many health benefits to be had from it: fighting off colds, managing stress, detoxifying, general anti-ageing internally – better-looking skin is just the sugar-free icing on the cake. 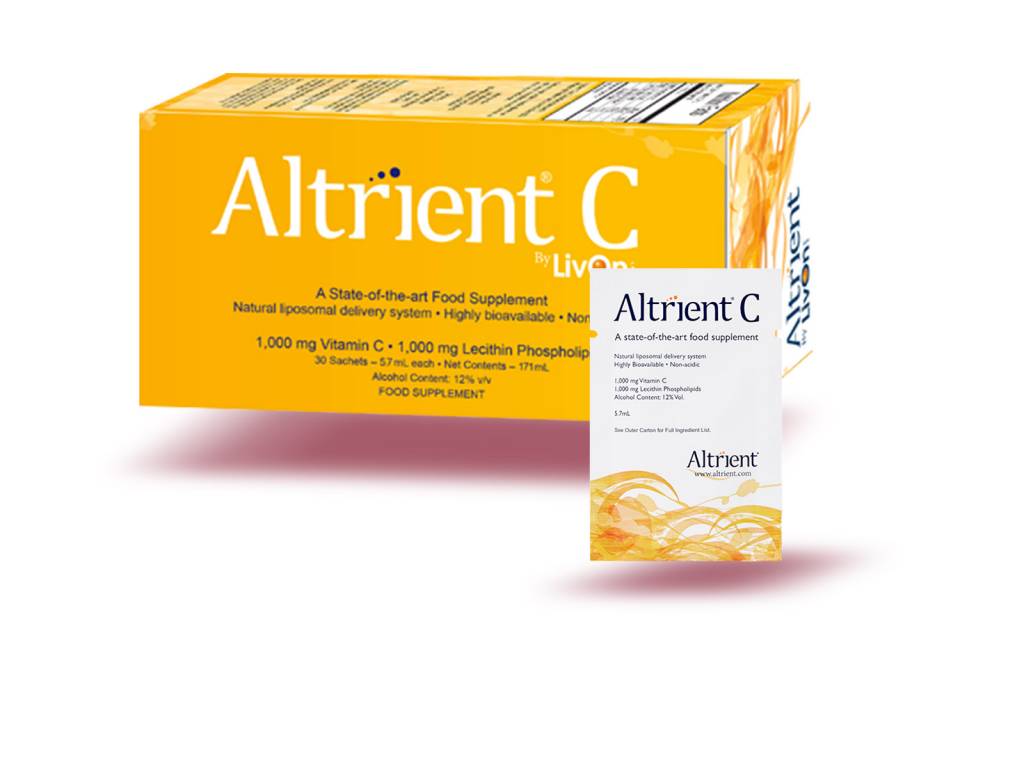 * For more skin health tips while on holiday, see the August issue of Top Sante, out in shops July 12.