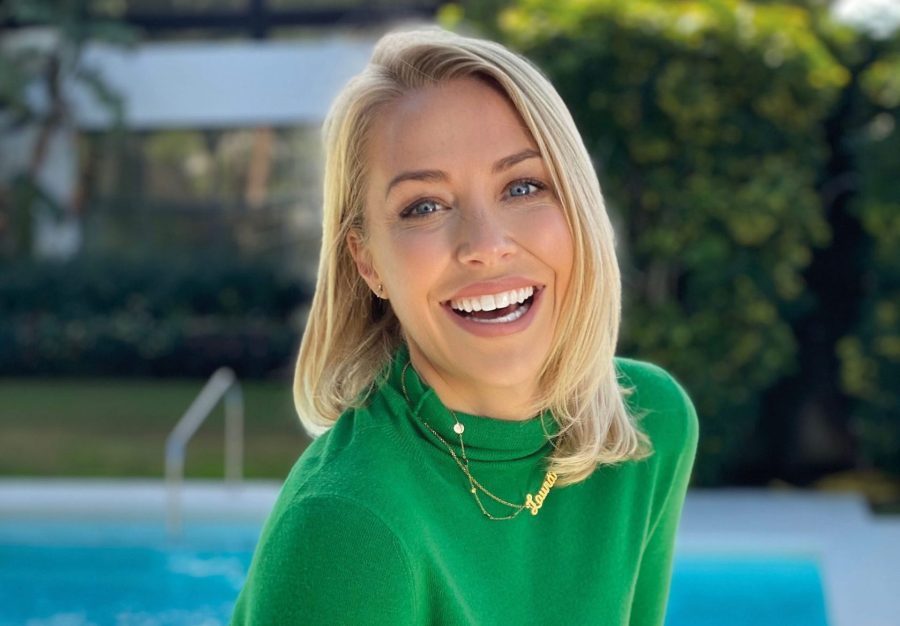 The A Place in the Sun presenter, Laura Hamilton, 39, shares how she maintains a positive mental attitude, how weight loss once became an obsession and how she plans on staying healthy at Christmas…

‘I always take my skipping rope when I work away. If I haven’t got a gym, I’ll put on my music and skip to a couple of tracks, which is unbelievably hard! I mix up the exercise.

‘This week I’ve done a couple of 3km runs and an interval training workout. During lockdown, I did lots of live workouts with personal trainers. A friend of mine, Harry Sellers, is a Barry’s Bootcamp trainer and I did some of his workouts.

‘I also exercised with my friend Kate Rowe-Ham, who focuses on exercises for perimenopause women. Part of the reason I work out three times a week is for my mental health, because those hours are my me-time. 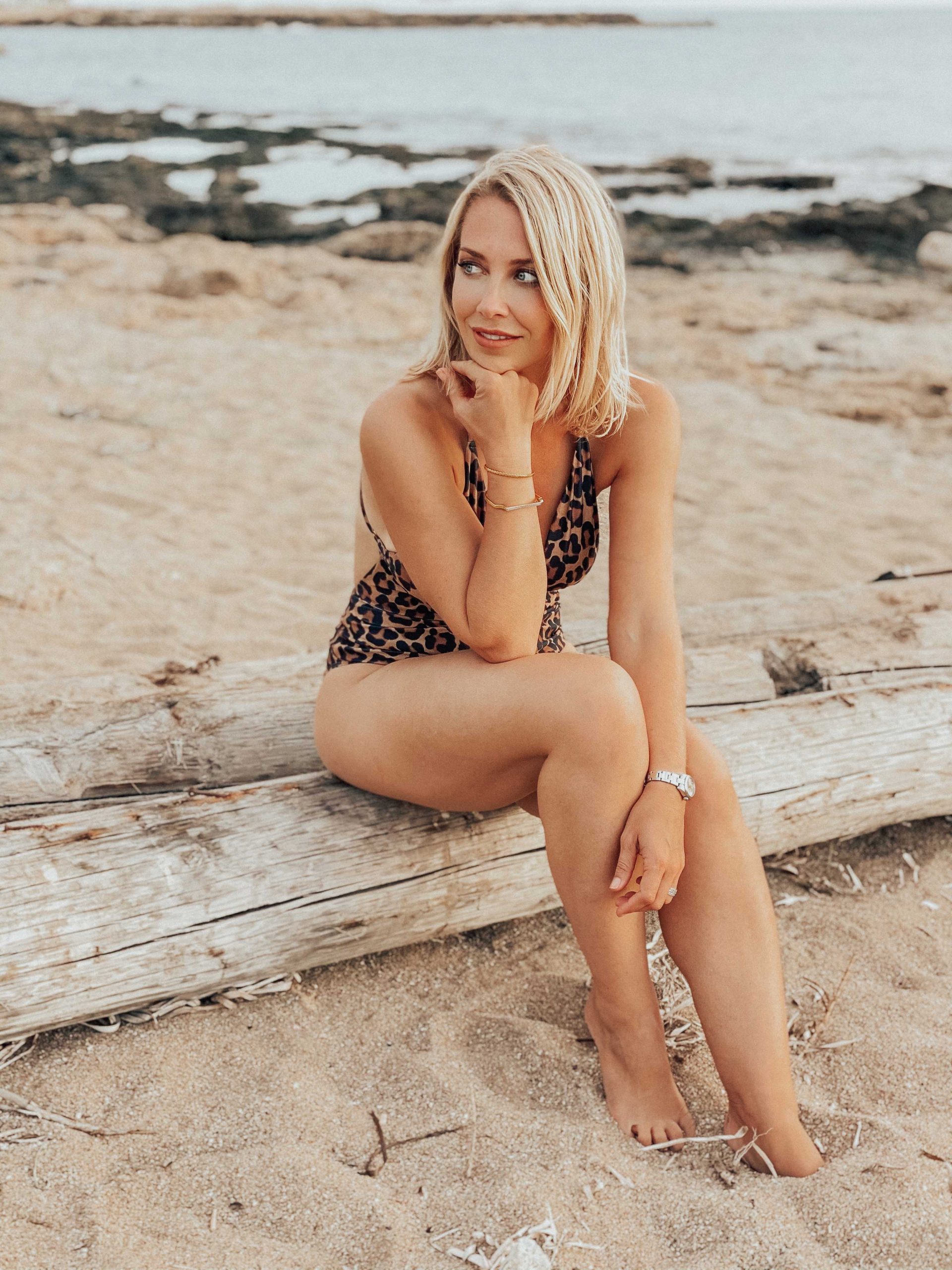 ‘I always wear an SPF. After Covid and when filming for A Place in the Sun had paused for five months, I noticed my skin was more sensitive to the sun. I’ve never had a skin cancer scare, but my uncle and late grandfather both had it, so I am mindful of protecting my skin.

‘I use Murad skincare and make-up from IT Cosmetics, which contains SPF 50. I mix that with a MAC Studio face and body tint, which lasts throughout the day, topped with a bit of powder.

Laura Hamilton: ‘I’ve never had a skin cancer scare, but my uncle and late grandfather both had it, so I am mindful of protecting my skin.’

‘I’m 40 next year, but ageing doesn’t worry me. It’s inevitable and will happen to all of us, if we’re lucky. I’m a healthy person overall; I don’t really drink much, I love exercising and I mostly have a healthy, balanced diet.

‘My mum thought I was mad for having Botox. I have had a little between my eyebrows to get rid of the frown lines caused from being in the sun.

‘I’ve started taking supplements. I use two from JS Health, one of which contains milk thistle, fennel and turmeric to help digestion, and another with turmeric, burdock and zinc to support skin and hair health.

Laura Hamilton: ‘I’m 40 next year, but ageing doesn’t worry me. It’s inevitable and will happen to all of us, if we’re lucky.’

‘And because I’m quite sporty, over the past six months I’ve become extra conscious of caring for my joints by taking Purolabs Puro Multivitamin (£34.99, purolabs.com).

‘I struggle to relax, but when my shoulders are knotty, a masseuse comes to my house. I’ll also go to the spa at my local David Lloyd club and I love listening to music.

‘I’m not very good at switching off; travelling and being on an aeroplane is precious time for me to watch a Netflix series. I’m an adventurer at heart. My motto is: If you set your mind to anything, you can achieve anything. 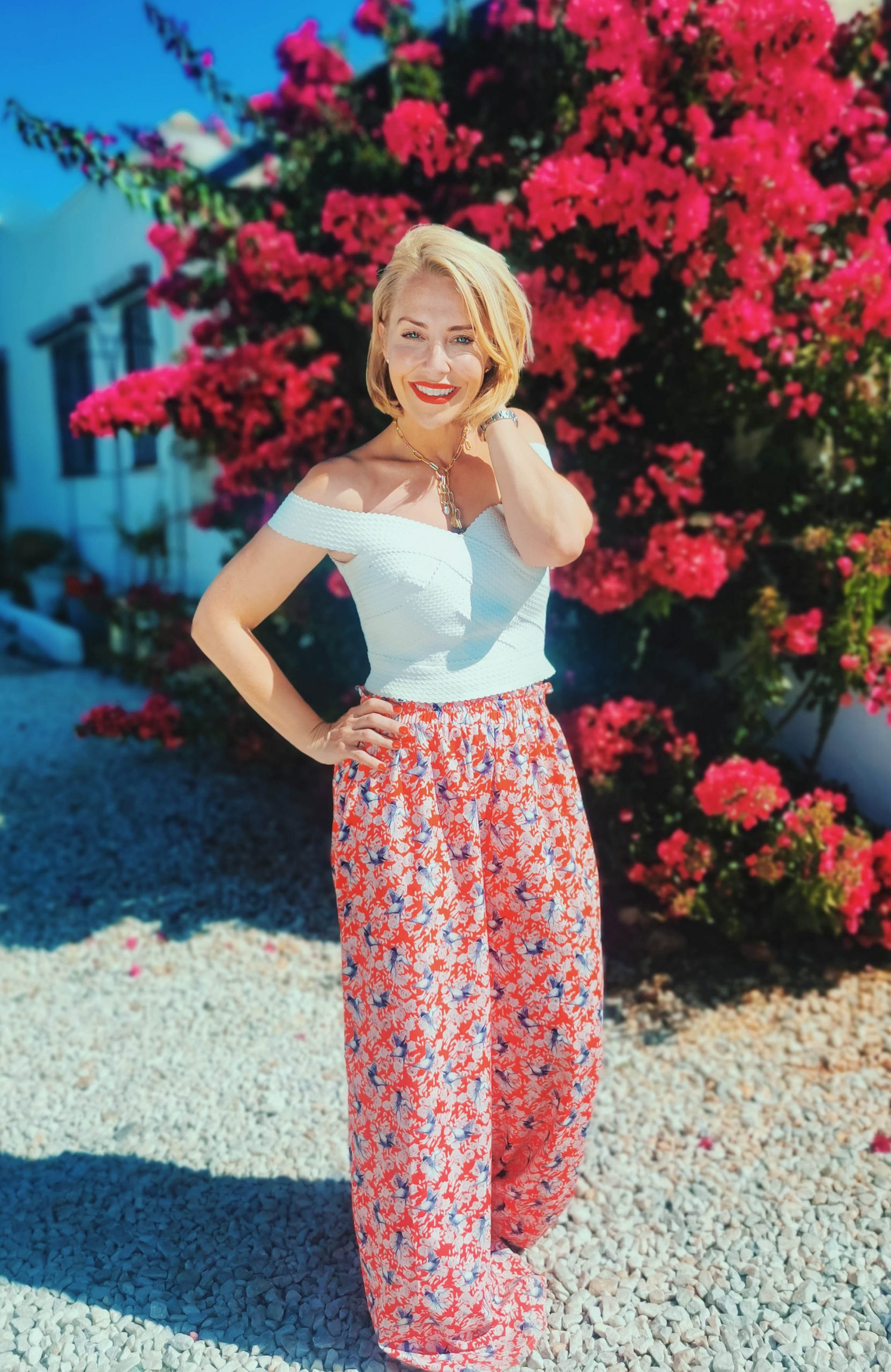 ‘When it comes to travel, I try to experience a place like I’m never going to go back, so I enjoy it to the max. People ask me how I cram so much into a day and why I do so much and the answer is: I want to live life to the fullest. You don’t know what’s going to happen next, Covid taught us that.

‘I’m a glass half full person and do other things as well as A Place in the Sun. I own a coffee shop and restaurant in Surrey and when the pandemic hit, we kept things running, delivering food to the community and keeping staff employed.

Laura Hamilton: ‘I want to live life to the fullest. You don’t know what’s going to happen next, Covid taught us that.’

‘I felt it was important to focus on helping others, rather than shut down and take what we could from the government. I contemplated a boob reduction operation in my teens. When I was 15, all of a sudden my boobs grew to 28FF and I had an out-of-proportion body.

‘I started ballet at the age of 11 and at 15 I was suddenly conscious I didn’t have a ballet dancer’s physique, because I also had quite muscular legs.

‘So I stopped ballet and made enquiries about having a boob reduction. When the doctor explained the procedure, it sounded scary and I realised I had my whole life ahead of me to settle into my body. I’m so glad I didn’t go through with it.

‘My dad always used to say, “It’s nice to be important, but it’s more important to be nice.” What he was saying is that it’s important to treat people how you would like to be treated.

‘It’s so important to be inclusive and that’s how I want to bring up my children; to realise you treat everyone how you want to be treated.

Laura Hamilton: ‘I contemplated a boob reduction operation in my teens. Then, I realised I had my whole life ahead of me to settle into my body.’

‘The other day, when I was driving my daughter, Tahlia, home from school, we were talking about kindness and politeness and she said, ‘Mummy, if it’s not kind, you should keep it in your mind’. She’s six! What an amazing thing to say.

‘It’s important to be a healthy role model to my kids. I promote as balanced a diet as possible, from sweets to savoury, carbs and fruit and vegetables. I don’t want my daughter and son to feel like they’re restricted from having anything because as they get older they’ll want them more. 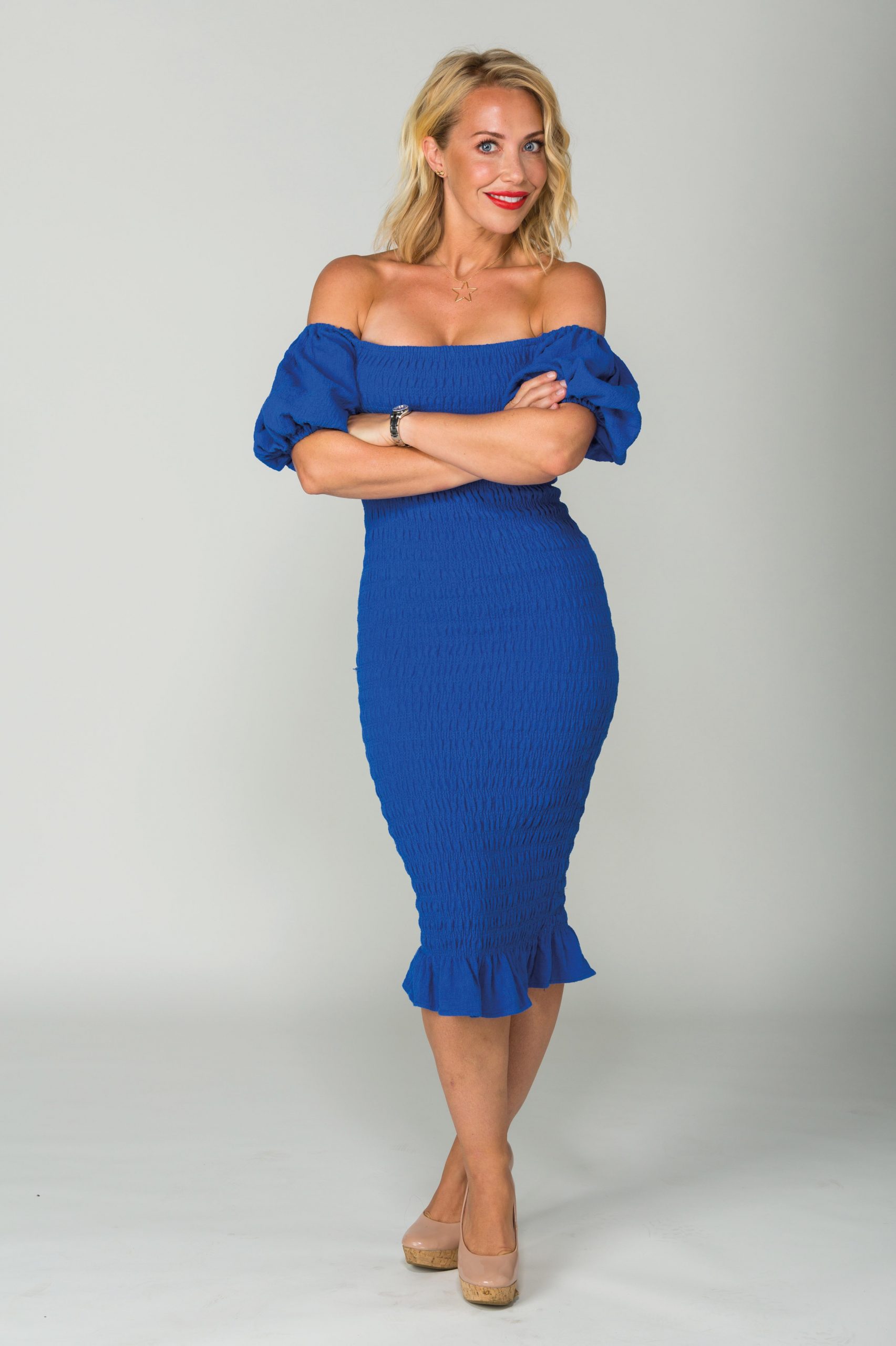 ‘Although, oddly, my daughter would choose a bowl of fruit over a bar of chocolate anyway! Growing up, if I wanted Nutella on toast, my parents would allow it but I was a very active child.

‘I played loads of sports including badminton and tennis, and at school, I used to run the 100m and 200m and do javelin. I also did swimming, singing and dancing and I’ve skied since I was nine. My kids are the same, always on the go.

‘I could have died having my daughter. During labour, I was in danger of bleeding to death because the walls of my uterus were so thin the surgeon could pierce it with his finger.

‘I had an emergency caesarean and was advised not to have any more children. It was pretty horrible lying there with my insides open and being asked if I’d like to be sterilised. No! I’d just had a baby!

Laura Hamilton: ‘During labour, I was in danger of bleeding to death because the walls of my uterus were so thin.’

‘I got quite obsessive with my weight after my last pregnancy. I wanted to get back in shape and went on a hardcore keto diet, which features no sugar and virtually no carbs, including no natural sugars from fruit.

‘Seven months after Tahlia was born I got down to 7st 4oz and had comments that I looked amazing, which spurred me on to lose more. I was weighing myself all the time and thought: “I wonder whether I can get down to 7st?”. I’m 5ft 3in and had never weighed that little in my life.

‘Only after I started gaining weight did people say I’d previously looked worryingly thin. Looking back, I feel so grateful I was able to realise my weight wasn’t healthy.

‘I’m now 8st 12lb and I’m happy with that. I’ve got cellulite on my legs, but I’ve also got a six pack and people always ask me how I’ve got such a flat stomach. Yes, I work out but I think it’s partly genetic. I’ve got a naturally strong stomach, maybe from all the sports as a child.

‘I have an autoimmune disorder called immune thrombocytopenia (ITP). Seven months after I had Tahlia, I developed bad bruising on my legs plus a bruise on my elbow. The doctor said I needed to go to hospital for blood tests, which revealed my platelet count had dropped dangerously low. 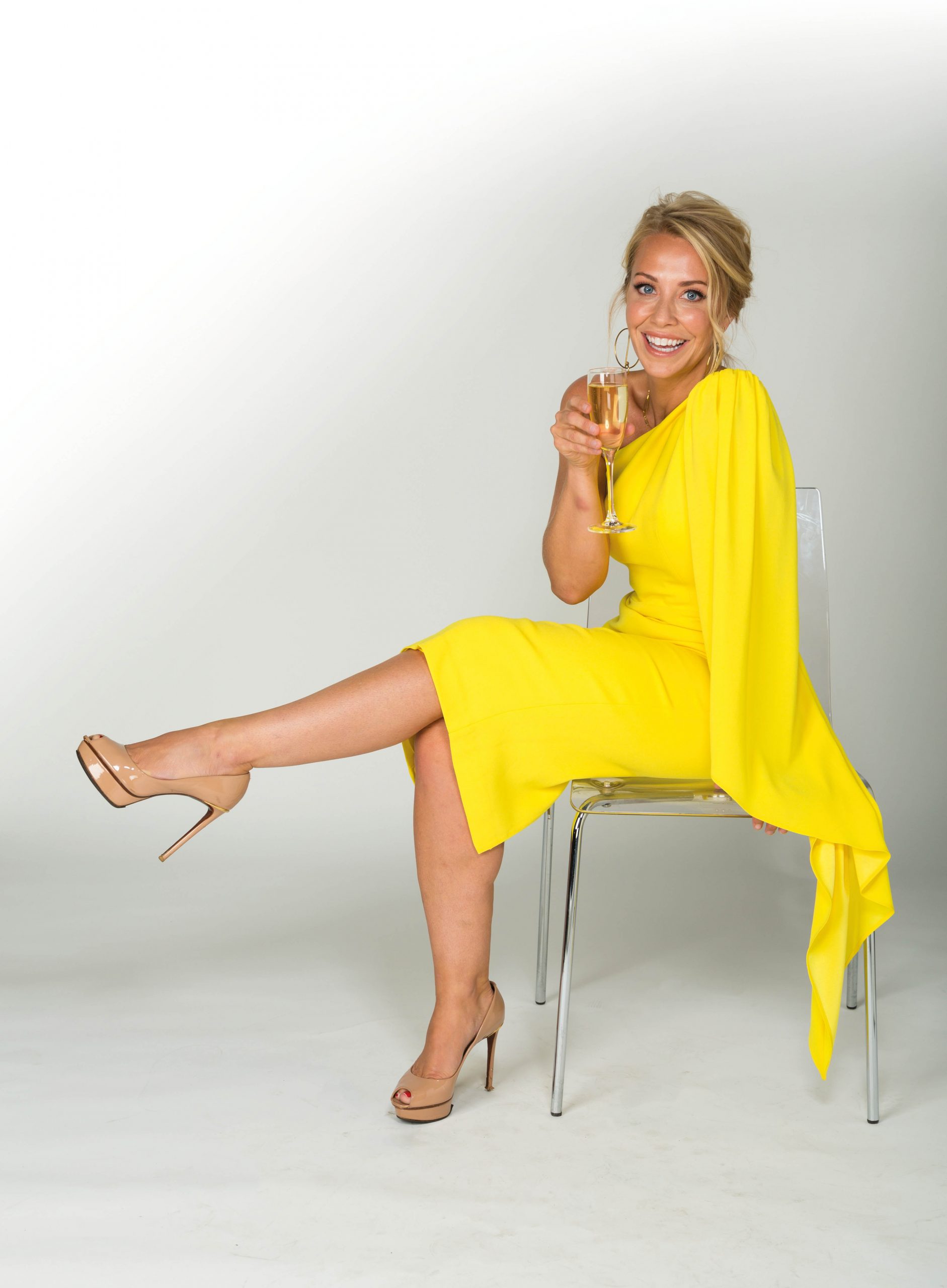 ‘Platelets are the cells that help blood to clot and when they drop below a certain point, you’re at risk of internal haemorrhaging and bleeding on the brain. With ITP, the body tells itself that the platelets are a disease so it starts attacking them.

‘The condition is rare and only 4,000 adults have it at any one time. Luckily, my ITP is never so bad I can’t live normally, but I notice it flares up when I’m stressed.

‘During those times, because of the bruising, I have felt I’ve had to justify the marks as people ask me what I’ve been doing to end up so bruised.

‘I always enjoy food in moderation and continue to exercise over Christmas. People talk about starting in the new year, but why wait? Just be healthy all year round so it doesn’t become a big thing. I don’t drink much but over Christmas I do enjoy a gin and tonic or a Baileys.

‘I love a Christmas dinner, Christmas pudding and brandy butter, so I’m a believer in indulging in what you fancy, but I hate the feeling of being unable to move after a huge meal, so I never let myself get like that – I know my limits!l

A Place in the Sun airs weekdays on Channel 4 at 4pm.

Click here for our exclusive interview with Gaby Roslin!