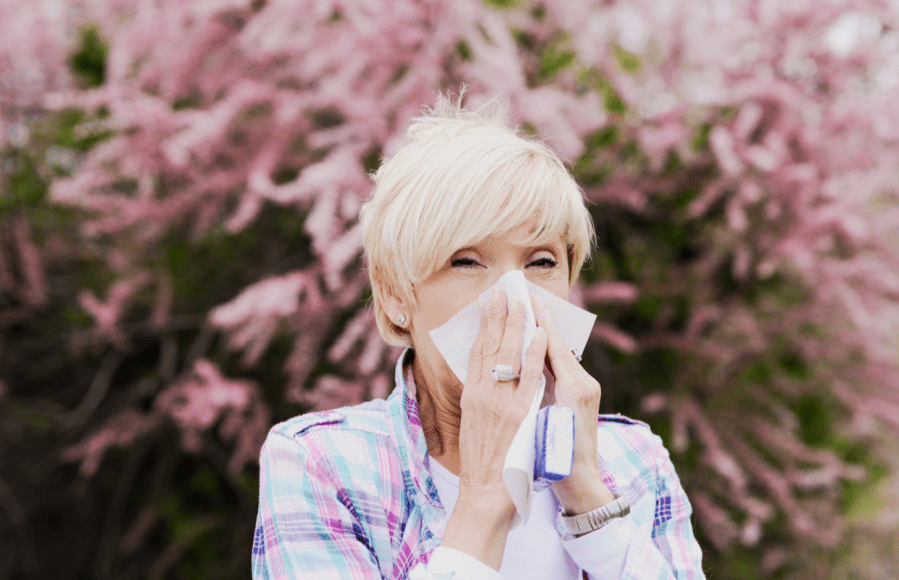 If you’ve suddenly developed hay fever in your 40s or 50s, it could be linked to your fluctuating menopausal hormones. We take a closer look at the link between menopause and allergies like hay fever…

Glorious sunshine, blooming flowers and the lingering scent of freshly cut grass on a warm breeze are all things that make summer wonderful. But, they are also aspects of warmer months that wreak havoc if you’re susceptible to hay fever. Seasonal allergies can strike during the menopause, even if you’ve never experienced it before.

An estimated 31 per cent of adults in the UK reported suffering from hay fever in 2018. However, according to Allergy UK, there’s been a significant rise in the numbers of both women and men developing the condition in later life. The National Pollen and Aerobiology Research Unit at Worcester University believes that for many, this is down to increased traffic and poor air quality causing pollen to become trapped at ground level. 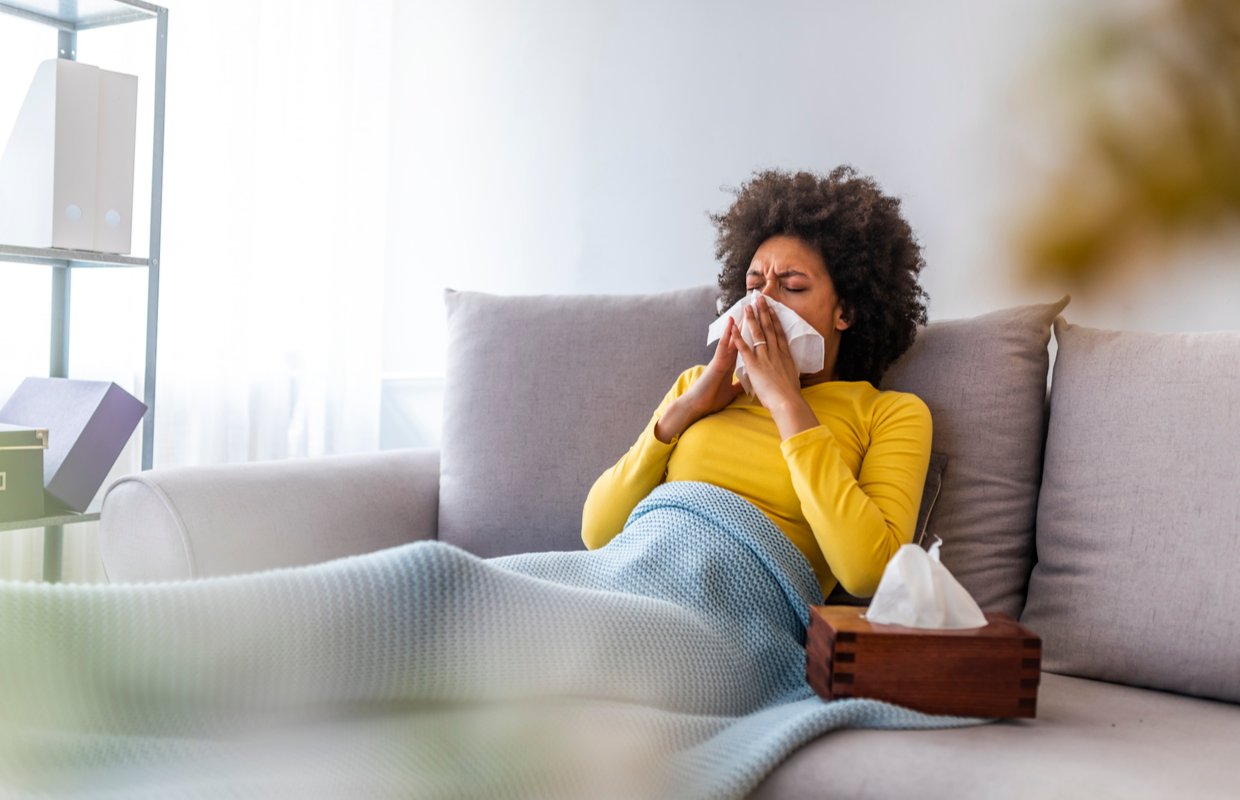 How does menopause cause hay fever?

However, for some women, it’s the hormone changes that accompany perimenopause and menopause that could be to blame for the sudden onset of hayfever. ‘The changing levels of the hormones oestrogen and progesterone can stimulate mast cells (important cells involved in allergic reactions), triggering allergies and asthma for some women,’ says Dr Louise Newson of Newson Health Menopause & Wellbeing Centre.

‘Many women also experience this change around menstruation, during pregnancy, and when taking oral contraceptives or HRT’. These mast cells release histamines (chemicals your immune system makes to fend off allergens and bugs through symptoms such as sneezing and coughing).

And, as oestrogen down-regulates the DAO enzyme that clears histamine, this stimulation can easily result in a vicious cycle of overreaction. This causes hay fever and other allergy reactions. Fortunately though, there are natural solutions that can and will help. Better yet, it is very likely you will grow out of hormonal hay fever once the menopause has passed.

How to ease menopausal hay fever through your diet

Adapting your diet to include low-histamine foods and anti-inflammatory herbal teas might be all you need to stay free from allergic reactions. Certain foods are high in histamines and these should be avoided.

On the other hand, some foods are low in histamine and, in some cases, even contain anti-histamines. These are capable of disrupting or blocking the histamine receptors in your immune system, thereby greatly reducing irritating menopausal hay fever symptoms.

‘Histamine is an extremely important bioactive chemical (a natural chemical that acts in the body). It is indispensable in the efficient functioning of many body systems,’ says nutritional therapist Deirdre Swede. ‘However, it can also be produced in high levels by the body during an allergic reaction, an infection and the peri-menopause or menopause. This can result in a histamine intolerance.

‘This reaction often leads to inflammation, which can result in hay fever, anxiety, hives, nasal congestion, headaches, digestive issues and itching.’ Unlike other allergies or sensitivities, histamine intolerance is cumulative, not immediate. It’s also closely related to digestive dysfunction, overgrowth of bacteria and gluten intolerance. This may cause a heightened sensitivity to histamine-containing foods.

This is why altering your diet to restrict these foods (and adding in some anti-histamine foods instead!) can make a world of difference to all allergies, including menopausal hay fever.

Low- and anti-histamine foods include:

Some herbal teas have amazing anti-inflammatory, anti-histamine effects, including: 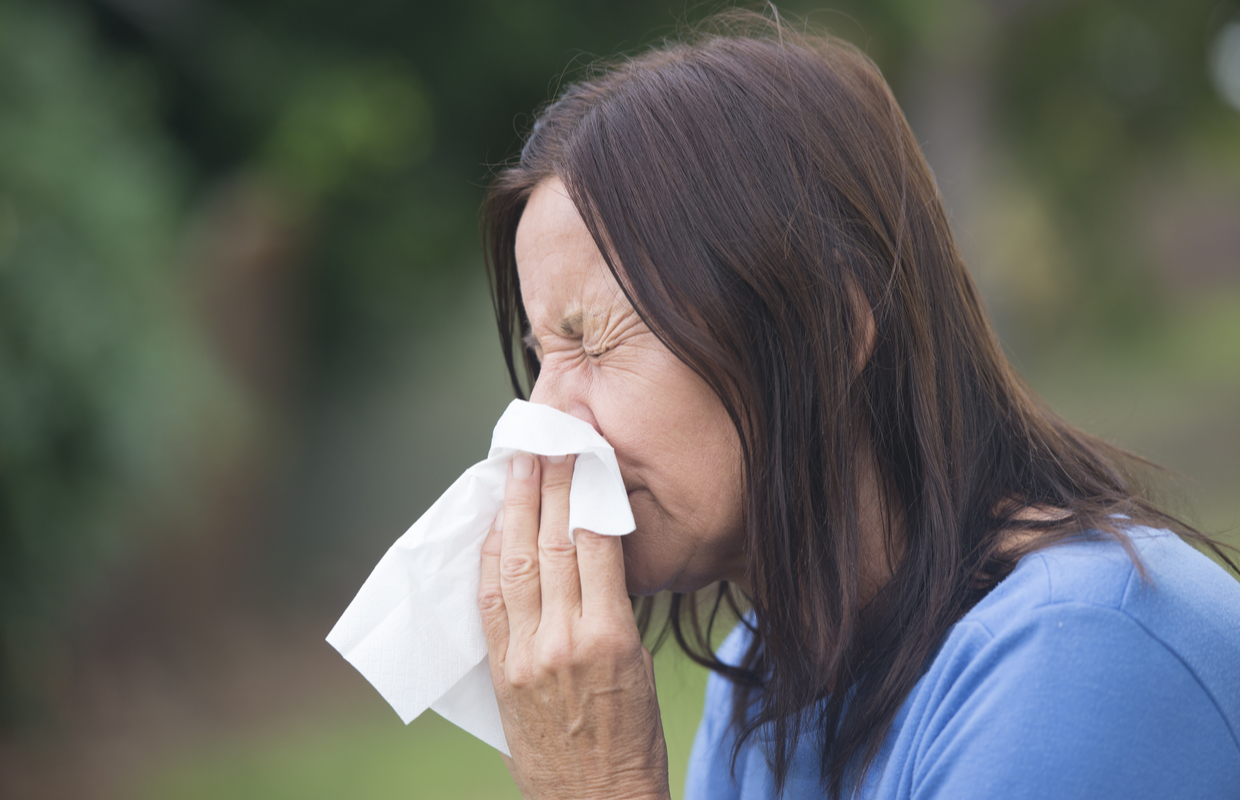 Inhaling aromatherapy oils has been shown to significantly reduce allergic hypersensitivity and inflammatory factors that can lead to hay fever symptoms.

In a study done at the College of Nursing, Chung-Ang University in China, 54 people with hay fever were exposed to vaporised oils of sandalwood, geranium, frankincense and ravensara for five minutes, twice daily for a week. Participants showed fewer symptoms and an improved quality of life.

The most effective method of inhalation is to use an aromatic diffuser. This enables essential oils to be absorbed rapidly via the tissues in your lungs, having an almost instantaneous effect. Alternatively, try steam inhalation by putting a few drops of your chosen oil or oils into a bowl of freshly boiled water. Then, drape a towel over your head and bend forward over the bowl to inhale the steam.

Another thing you can try is to carry a vapour oil bottle with you throughout the day. If you think you might have a reaction, or if you actually do, take a few sniffs from the bottle to ease your nostrils. 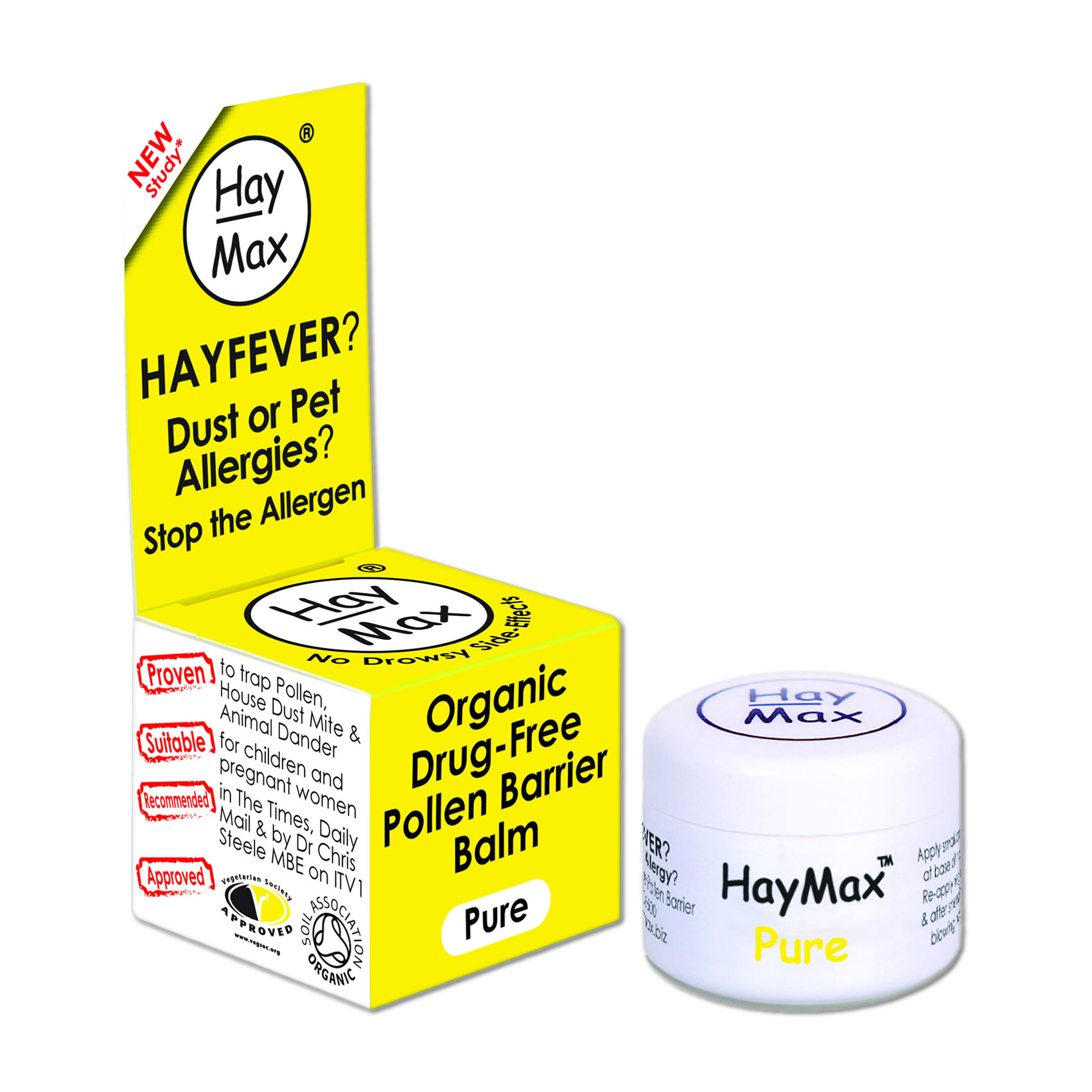 HayMax Pure is a 100 per cent organic, all-natural balm that helps to trap more than a third of pollen before it enters your body. Simply apply to the rim of your nostrils. It’s transparent, so won’t show up!

Bird & Blend creates a wide range of herbal teas, many of which – including their Mojitea and Gingerbread Chai – are packed with symptom-soothing ingredients. 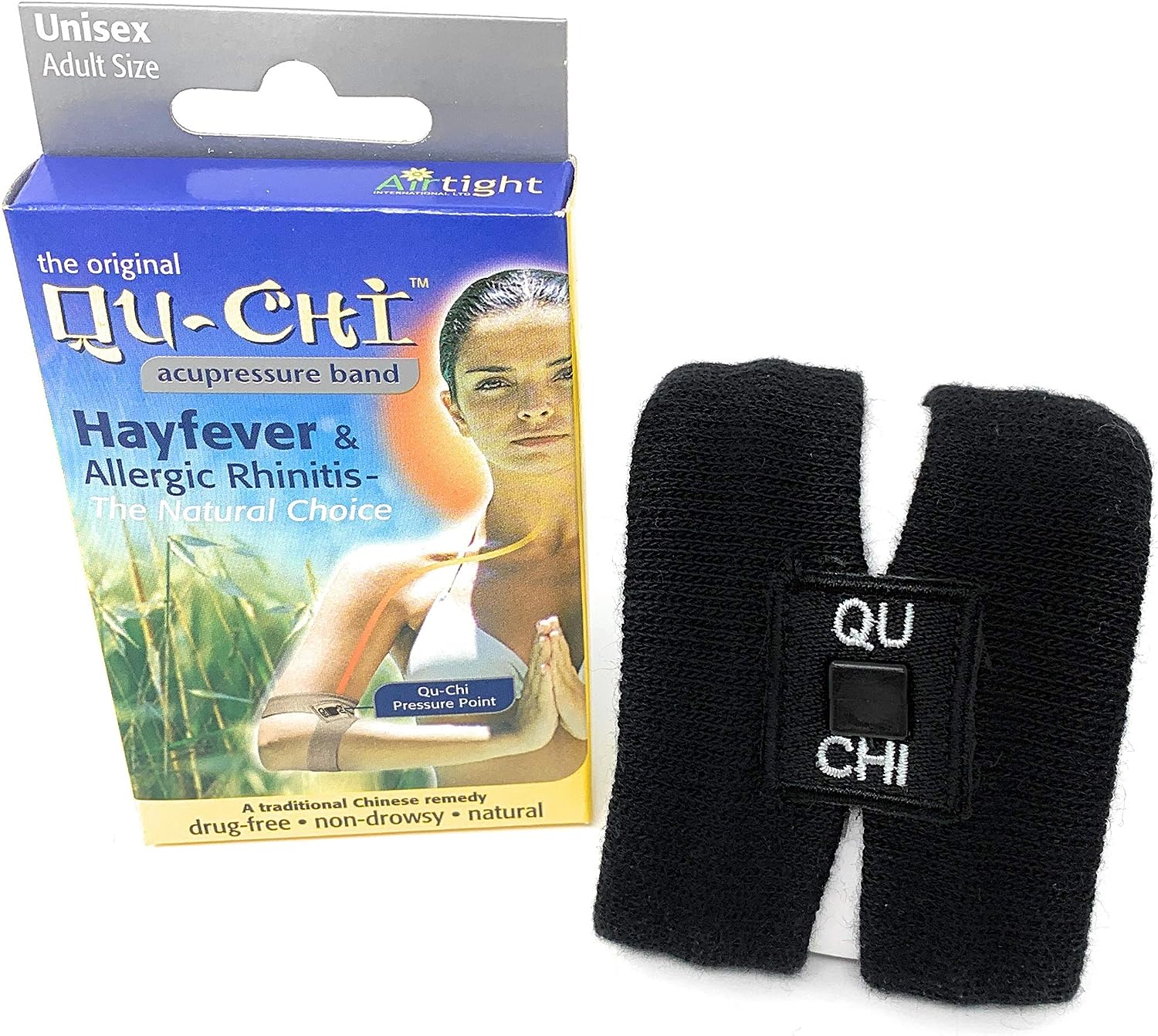 Qu Chi Hay Fever Band was developed by a leading UK acupuncturist. It applies pressure to a point thought to pull energy away from your head, nose, face and throat to harmonise your body’s energy system if allergies strike. If your mattress has reached its seventh birthday, then it’s time for a change. All Otty products are hypoallergenic and have removable and washable covers, making them perfect for anyone with allergies. Plus, the cool blue gel memory foam helps to keep you at the perfect temperature. Super handy if you get hot flushes at night!

Article created in association with A.Vogel.