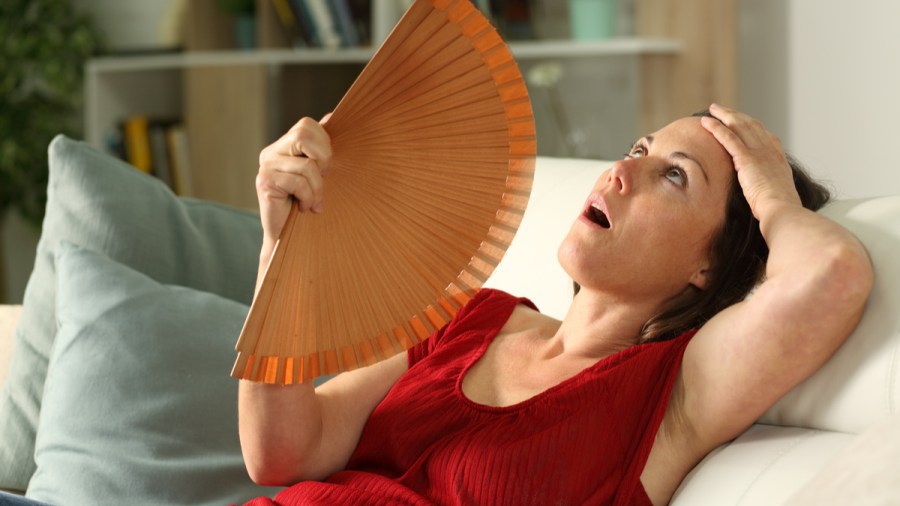 Find out why hot flushes happen and how to deal with them in our extract from Perimenopause Power: Navigating Your Hormones on the Journey to Menopause by Maisie Hill

Hot flushes are the most well-known menopausal symptom and for good reason – in western countries, up to 88 per cent of women will experience them, though this does vary country to country.

Their frequency can vary hugely, too. Some people will have five per year and others will experience 50 per day, with individuals also experiencing variations in how long they last. The duration of hot flushes has been reported as being between one to five minutes, though some can last up to an hour.

Hot flushes and night sweats can persist in the years following your last period. In the Study of Women’s Health Across the Nation, which looked at 3,302 US women undergoing the menopause transition, the average duration was 7.4 years. At the age of 65, 25 per cent of women will still be experiencing them.

Hot flushes can have a tremendous impact on the personal and professional lives of those experiencing them, and the consequences of them are often underestimated.

What causes a hot flush?

Despite their prevalence and impact on quality of life, the underlying mechanism that results in a hot flush remains unknown. Although hot flushes are associated with the lower levels of oestrogen that accompany the later stages of the menopause transition, they can also occur prior to the withdrawal of oestrogen, so the explanation of a low oestrogen state is inadequate.

What does differ are the levels of activity in a part of the brain known as the central noradrenergic system. It’s the discovery of these changes that has led to the leading hypothesis of why we get hot flushes.

Changes to this process of thermoregulation are what’s thought to result in symptoms such as hot flushes and night sweats. During the menopause transition, the thermoneutral zone narrows and when the upper threshold is crossed, a signal is sent out to get rid of heat.

It does this by dilating your blood vessels and increasing blood flow to your skin. And sweating, lots of sweating.

How can I deal with hot flushes?

So what are the options for treating and managing the problem? Hormone replacement therapy – though I prefer to call it menopause hormone therapy – is easy to access through your GP. More often than not, oestrogen is the hormone that is focussed on, but during perimenopause oestrogen is often high and erratic, in which case body-identical progesterone can be used to treat hot flushes and insomnia. If, however, you’re also experiencing symptoms of low oestrogen, such as vaginal dryness and painful joints, then using oestrogen and progesterone would be more beneficial.

What action can I take to ease hot flushes?

Another option is paced respiration, which refers to slow, deliberate, deep breathing. Instead of the average 15 breaths you take a minute, you slow your breathing rate to six to eight times per minute. Some studies have found that paced respiration reduces the frequency of hot flushes by as much as 50 per cent.

Cognitive behavioural therapy (CBT) is another popular treatment option. Though it doesn’t appear to reduce the frequency of hot flushes, CBT is effective at reducing their impact. This is important as our attitude and anxiety about having hot flushes intensifies the severity of them.

Finally, as an acupuncturist, I am of course going to tell you that acupuncture is incredible. I’ve used it to successfully treat hot flushes, night sweats, palpitations, restlessness in the evening, sleep issues, excessive thirst, anxiety, depression and irritability. Some research has shown it is effective in treating hot flushes and night sweats and some have concluded that it’s as effective as a placebo.

Are there natural ways to deal with hot flushes?

Studies have demonstrated that the herb, black cohosh, is effective in treating hot flushes and, because it doesn’t contain phytoestrogens, it can be used by those who can’t take oestrogens.

Red clover is a phytoestrogen and it’s said to help with flushes and night sweats, though the evidence from research is mixed.

Another herb, ziziphus is used in traditional Chinese medicine and is derived from red date. It can aid sleep, reduce anxiety and relieve sweating. It’s said to calm the spirit, so you can see why it’s popular for managing menopausal symptoms.

A dried extract from the roots of rhubarb has been commercially available in Germany for several decades and studies have found it can reduce the severity of the problem thanks to its oestrogenic actions.

This herb has been used for centuries to treat night sweats, thanks to its drying effect. some types of sage contain a chemical called thujone, which can cause negative side effects, such as vomiting, so buy the ‘thujone-free’ sage.

Some studies have found that pomegranate seed oil can reduce menopausal symptoms, such as hot flushes, sleep issues, depression, exhaustion and vaginal dryness.

Extracted from Perimenopause Power: Navigating Your Hormones on the Journey to Menopause by Maisie Hill (Bloomsbury, £14.99). Available to buy now.

Find out how to stay strong during the menopause.